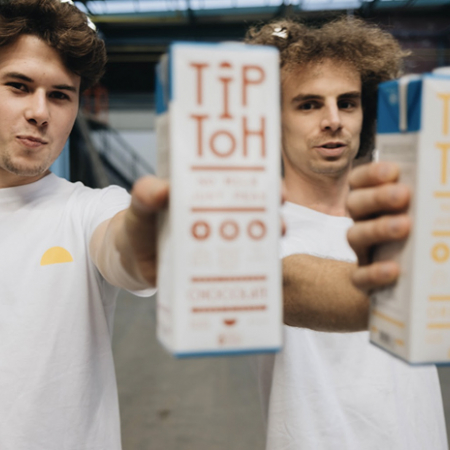 Kira Nash chatted to Louis Curtil, one of the founders of the new Belgian pea milk brand Tiptoh.

What is your background? How did you decide to create a plant-based milk startup?

I was a physiotherapist for about six years and my interest points were everything about health, the climate and cooking. But when I started working as a physiotherapist, I knew that I wouldn't be one for the rest of my life. Partly because I like entrepreneurship and physiotherapy wasn't giving me that fulfillment; it wasn’t allowing me to grow a business like this. Plus, I wanted to have a certain impact. My granddad taught me a lot about the climate when I was young and it’s something that I'm still passionate about. On the other side, from a “why plant-based drinks” standpoint, my brother is lactose intolerant. When I was young, I read an article about how strange it is to use cow’s milk as an adult and I stopped drinking milk even though I wasn’t vegan or vegetarian. So, I was really used to drinking plant-based milk and, like I said, I love to cook. I make a lot of things at home in my kitchen.

When COVID struck, I was technically without work for about three months, so I was continuously in my kitchen making stuff. One day, I thought maybe I should make something that people can buy. Just around that time, I caught up with Arnaud again (Arnaud Muylaert, the other founder of Tiptoh). He was finishing his studies in business and finance and I thought that we were a good match because he has the same vision that I do about life and about how food can make the climate better. We looked at what I was doing in my kitchen and we realized it was not a feasible business. But I was also doing some market research and I came to the yellow split pea. It’s what they use at Ripple in the US; they started to make pea milk about seven years ago.

I thought the concept was quite interesting. Milk from yellow split peas can be produced locally for us in northern Europe because you can grow peas here. Also, there are no allergens and it has a good quantity of protein, too: a bit less than soy, but still quite high. Really, we only had one question: ‘what did it taste like?’ because we couldn’t get any Ripple to try. We found out that there were already European companies making something similar, and so we started trying some out. When we created our pea milks, however, we made some different choices than the brands already on the market; on the protein content, for example, we wanted to mimic milk. We also went for a neutral, creamy taste. We have the advantage that we’re among the first producers in Europe; at the moment there are maybe four or five companies doing this. At the moment! There will likely be many other companies emerging over the next few years.

We applied for a grant from Flanders (in Belgium) for some money to develop the product. It’s been maybe a year and we now have a product that’s commercialized. We're currently selling it on our website and we've developed a taste that we’re proud of. And that we like!

Aside from the feasibility of production and the lack of allergens, what else drew you to yellow split peas as a base ingredient?

It was also all the other advantages of yellow split peas, like their place in crop rotation and their ability to fix nitrogen in the soil. All of that was quite important for us. At the moment, we buy our pea protein from a big producer in France but in the next few years we’re aiming to have that knowledge in-house and be less dependent on the bigger players.

We want to be more involved with the environmental impact on soils and be able to work with our own producers more locally. Our current supplier is in the north of France, so not really that far from us in Belgium, but we would like to know how to develop our own pea protein so that we can get closer and closer to the farmers. It’s also a strategic choice to be independent and not to be reliant on another party.

If the sustainability and environmental impact are big factors for you, are you looking at moving toward using organic peas at some point?

When we started developing, there wasn't really a good organic variant available. We could have bought organic peas from China but, of course, it’s further away. We did actually have the chance to work with a Belgian producer but we chose the French one because their quality was better. With peas, you can get a kind of aftertaste and the stronger the aftertaste, the more work needs to be done to cover it. So it was logical for us to choose the pea protein with the least aftertaste. But to go back to the organic questions, it just wasn’t possible.

Our supplier did get in touch a couple of months ago to say that we could have organic protein now but we expect the price to be quite high as peas are quite expensive anyway. Once we are a stable company though, it could be a pivot.

You mentioned that the quantity of protein was a priority for you; what is the protein content of Tiptoh?

It’s between 3-3.2g per 100ml. It depends: our first production was 3.2 but. when we scaled up, it was only 3, so we have a little bit of dilution. Cows’ milk is 3.2 or 3.3, so that was our aim. Overall, there were four problems that we needed to address. The first was taste: not every pea milk tastes good but if we want more people to drink plant-based milks, we need them to taste good. Then there’s functionality: we think it's important that a plant-based milk can be used to do everything for which you would normally use cows’ milk. The third point was the fast-growing number of allergies and intolerances; it’s something to bear in mind for the future. And then the last part was nutritional value - a lot of people don’t think that plant-based milk is nutritious enough but, if you use soy or peas, it is. So those were the four questions for which we needed to find solutions.

Tiptoh has the same nutritional value as cows’ milk along with important vitamins and minerals. You can drink it straight like milk, use it in pastry or savory cooking or even foam it for your coffee. Those were all the things that we really focused on in our development. And, although we’re happy with it now, the taste is something that will evolve over the years as we really find out what’s working best. For the functionality, we are quite close to where we want to be; we’ve just had a little bit of a loss from the industrial alpha production to the industrial beta production. So we need to fine tune it for the next production and get it back on a level with the alpha-version functionality. That’s where we are at the moment.

What is your current distribution? And what are your future plans: do you want to expand throughout Europe?

We started our sales in November of 2021 so it's very, very early. We’ve currently got our online webshop and we mainly sell in Belgium (although we’re also open to the Netherlands). We spent some time in December working on all of our advertising and promotions for the webshop.

We also have two other channels. Specialty shops and coffee bars are one and the other is retailers. In 2022, we want to be in one big retailer in Belgium. Our ambition for this year is to sell 300,000 liters and to expand into the Netherlands and France but we still need to figure out how to open our webshop to France as the shipping is quite expensive. We need to find a solution; maybe we can work with a fulfillment partner.

In the end, the real purpose of our webshop is to be like a modern milkman: a subscription model where everyone gets something like 12 bottles a week. It’s an interesting idea, especially for city areas, because people often do their shopping by foot or by bike and carrying 6 or 12 bottles is not ideal. So we’d like to arrange something where, every two months or so, you get a delivery and you’re good.