Tuba Memis/ “The war in Ukraine is making the Turkish chickpea export ban even more complex.”

Jesse Sam caught up with the import/export manager of Memisoglu to get her outlook on the Turkish pulses market this year. 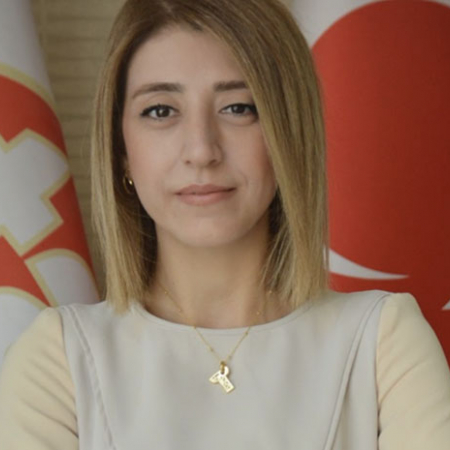 Tuba Memis is the manager of exports and imports for Memisoglu, one of the largest agricultural companies in Turkey. With nearly two decades’ experience behind her, Memis has in-depth knowledge of the country’s pulses sector. Jesse Sam spoke to her in April to find out the latest.

Can you tell us about your background in Turkey’s pulses sector? When did you start and what do you do currently?

I’ve been working in the pulses sector for 16 years. After I graduated from university in 2006, I joined my family’s company, Memisoglu (TAT). My father started the business with his brothers back in 1977; since then, it has grown into one of the largest producers and exporters of pulses, rice, and bulgur in Turkey.
So I am the second-generation of my family involved in the pulses sector, and I’m not alone. I also have several brothers, sisters, and cousins working in the company. Currently, I oversee our import and export operations.

How has Memisoglu (TAT) grown over the years and where are your operations focused today?

We’ve passed a lot of important milestones since 1989, which is when we started our pulses and grains business. We started exporting in 1992. By 1994, we had created a domestic retail brand, called ‘Tat’. And between 2001 and 2009, we opened a series of processing facilities for red lentils, rice, and bulgur.
Today, our operations are spread across nearly 350,000 square feet in 9 facilities. We have the capacity to split 750 metric tons of peas and lentils every day; overall, our pulses production capacity is around 3,000 MT per day, making us a very important global producer. We split our production 50-50 between serving the domestic market and exporting to more than 80 countries worldwide.

With all of your experience in the industry, what are some of the most significant changes you’ve witnessed over the last 16 years?

One of the most interesting trends to watch has been the rise of Canada as a lentils producer. So when I started in the business, back in 2006, Turkey was the most important exporter of lentils (and chickpeas). In that time, however, Canada’s production has grown steadily to the point where they now produce 2 million MT each year, making them the biggest exporter. Meanwhile Turkey’s production has been falling, and now we import from Canada, as well as Argentina, the U.S., and Russia.
But Turkey will always be an integral part of the global pulses sector because of our unique location. Our proximity to big importing countries is a huge advantage for the re-export sector. That’s why our company has invested heavily in state-of-the-art processing facilities in Mersin, Edirne, Istanbul and Izmir. We can import lentils from Canada, process them, then re-export them to our customers in the region.

One thing that has disrupted Turkey’s international trade is the ban on chickpeas exports, which was introduced in October 2021. What impact has the policy had?

So the context behind the ban was a shortage of domestic production — the government wanted to protect domestic prices and help ease inflation. It was a difficult adjustment for us as traders, and trying to explain to our customers around the world. But we were all able to fulfil our pre-existing contracts.
The ban is still in place, so we’ve had to adapt. We are focused on re-exporting chickpeas from different origins. Like a lot of other Turkish traders, we took positions and bought from Australia, Canada, and Russia.
The Russia-Ukraine war has made the situation even more complex. Commodity prices have increased and so the government has widened the export ban for more food products, including white beans. But again we have adapted by exporting beans from Argentina, Canada, Kyrgyzstan and other origins.

I think that once we have a new crop of beans and chickpeas, the government might be able to reverse the ban. So far, the weather is good this year. Chickpeas and white beans were planted in April; red lentils were planted in December and January, and we saw a 20% increase in the amount of crop planted, which is very encouraging. Last year’s yield was significantly lower than expected because of a drought; if we can achieve an average yield this year, then we will have more product than last year.

What about the currency crisis in Turkey — what is the current status of that ongoing issue?

If you look at the Lira-USD exchange rate over the last 12 months, we have definitely seen a weaker Lira. For us as exporters, that can actually have a positive impact on our business, as our products (the ones we are allowed to export) become cheaper for international customers. But domestic consumption is also important for us. Pulses are a staple of Turkish diets, so demand is quite resilient. But when inflation gets too high, we inevitably see reduced consumption.

You mentioned the Russia-Ukraine war. How is that affecting Turkey’s pulses market?

Turkey is one of the biggest buyers of Russian and Ukrainian commodities. In terms of pulses, our company imports yellow peas from Russia which we split and re-export to places like Iraq, Sri Lanka and parts of Europe as part of UN tender. The same is true for kabuli chickpeas.
The war has also created huge currency risks for traders. The USD-Ruble market has been unstable, with prices fluctuating by nearly 100%. An unstable currency makes it difficult to trade; added to this, freight costs have also increased significantly, so business is very slow in the Russian market right now.
I think the war represents one of the biggest risk factors for our market in the coming months. If the war continues, it could have very serious consequences for the global food market.

Finally, what’s your outlook for Turkey’s harvest later this year?

We are feeling quite positive about this year’s crop. The weather has been good; we received good rain and snow this year.
As I mentioned, lentils have already been planted (back in December/January) in the south east of the country and we saw a 20% increase in the amount planted. The picture for chickpeas is a bit more complex. Turkey’s chickpea production is concentrated in the middle of the country and they usually plant in March. But because of the increased rains, the soil was still wet by this time, so they delayed until April.  The lower cost of production for chickpeas means that farmers have been willing to plant more this year, and the government has been offering financial support to farmers who plant chickpeas on idle or fallow lands.
So overall, I would say it is a positive picture and definitely an improvement on last year.