This week, we spoke to James about Pulses UK’s core mission, Brexit’s impact on the agricultural industry and the future of pulses.

James Maguire has worked in the agricultural industry for over 11 years, taking on many different market sector roles, from commodity trading and business development to the commercial sales and product management role he performs now at KWS UK. Having become the president of Pulses UK in March 2021, he says it’s a very exciting time for the pulse industry. This week, we spoke to James about Pulses UK’s core mission, Brexit’s impact on the agricultural industry and the future of pulses.

Pulses UK is a trade association that represents everyone in the pulse industry, from shippers, importers and exporters to plant breeders and fumigators and everything in between. Founded in 1950 as the Pea Pickers Association, it has a long, rich history in the UK and, in 2018, rebranded as Pulses UK. As an association, it has one primary goal: to increase the production and consumption of pulses in the UK.

Could you begin by telling us a bit about pulse production in the UK?

Absolutely. So, in the UK, we’re well known for beans, which is the biggest crop. The spring bean area is approximately 70,000 hectares, and there’s the winter bean area, too, which is 40,000 hectares.

We’re also known for four different types of peas, the smallest being maple peas. They’re generally a feedstuff for pigeons and take up around 3,000 hectares. Then there are marrowfat peas, which are used for wasabi peas, bar snacks, that kind of thing. They’re the real high-end peas, lower-yielding but higher value, at around 5,000 hectares. There are also yellow peas, which, up until recently, were not necessarily the most desirable, at approximately 6,000 hectares. However, for wet protein extraction for human consumption, this is likely to be the market that grows. Our biggest market is what we used to call large blue peas, or in Europe 'green peas,' which is around 25,000 hectares.

Regarding the main domestic markets, you typically see blue peas go into the grocery trade, cannery, mushy peas, and the emerging snack market. So, that’s your pea flours and pea crisps.

When it comes to beans, there’s a bit of domestic trade, probably more for animal feed than anything else.

Regarding exports and imports, could you talk about the main markets?

The main bean market is in North Africa and is taken by three main origins: the UK, France and Australia, who are all vying to get into that market. Last year we found ourselves doing a lot of exports to Sudan, while Egypt was difficult to enter. That’s because the Australian beans were more price-competitive. That said, this year, we might see more going to Egypt and less to Sudan because Australia has had a slightly smaller crop, but when their harvest kicks in, we’ll start to see that market taken by Australia. They’re just that bit closer geographically, and their freight is cheaper.

I’d also say that it’s a bit of a shame that ‘human consumption’ beans are overlooked in this country. We’re growing this amazing foodstuff that we’re not eating. Predominantly, our diets are more centred around cereals. It’s interesting because, in Egypt, they grow more salad crops and import beans. So, it’s a bit of a circular market and arguably not the most sustainable but that might be something we see change in time.

Brexit has had far-reaching consequences for many businesses; how has it affected the agricultural industry?

It’s definitely affected all businesses within the association, and our members will have seen different changes. More broadly, currency has been one change that has affected most people. Initially, Brexit firmed up the pound and it helped us all regarding exports however now it's flattened back out and there’s not so much of an advantage.

On top of that, the pandemic and Brexit have meant that there’s been a lack of seasonal labour. We rely on this because we have a classic agricultural cycle. There are peaks and troughs and in the peaks we need more labour and they just haven't been able to come in this year. That’s partly due to Brexit and partly Covid-19 restrictions as well.

Although we have EU equivalence with some products, customs and paperwork have caused delays for both imports and exports. There’s a lot of red tape, more than ever before. So, while it's not a prohibitor for trade, it certainly restricts things.

Overall I think, in the agricultural trade, everyone just sort of got on with it. For years, Brexit was hanging over us, but many tried to Brexit-proof things, especially talking from the perspective of the company I work for. We were ready for when it happened and had contingencies in place. Ultimately, it hasn’t limited anything our business has been able to do. We still trade with the same people in Europe, there’s just more of a paperwork trail. I think that’s what the membership would say, too.

I know the Dal Festival was postponed due to Covid-19, but could you tell me a bit about that?

Yes, so the association has been making a big push to talk to the consumer and talk to the general public, and one idea to do this was the Dal Festival. Within the UK, there’s a lot of dal eaten, particularly in specific ethnic groups. We wanted to promote the products being used. So, the festival is really a celebration of all things pulses.

The first two events were in Bristol as it’s a very foody part of the UK. We had food trades, markets, cooking demonstrations and a big finale event. It really promoted pulses and taught people more about the agricultural side of things: where the products are grown, how they’re grown, and how brilliant they are environmentally.

It’s a shame that due to Covid-19 we had to pause the festival but I think in 2022 we’ll definitely push on with the event. It was growing every year and there were lots of new businesses that wanted to get involved. I can’t wait to kick it off again!

Are there any other projects that are on the horizon to increase awareness of pulses in the UK?

Historically, we’ve run a lot of grassroots events. A lot of the time, we target schools nationally to talk to them about pulses and agriculture. It’s all about educating children about pulses, explaining that they’re there, they’re available and that they have a huge number of benefits. Starting young is really important.

In terms of industry, we do a lot of work via the association with individual members to push the benefits of UK pulses. There’s starting to be more snack trade within the UK; for example, instead of buying potato crisps, more people are trying pea crisps, and trade is really growing. It’s all about jumping on the back of these trends and getting involved in the promotion.

The popularity of alternative proteins is only growing. What do you think is next for pulses and what are your projections?

Looking at the supply chain, we see a big consumer trend towards eating less meat. I, for example, am a staunch meat-eater, but even I am moving away from eating meat every day. Flexitarianism is on the rise in the UK, and that’s because there are big health benefits and huge environmental benefits, too.

I expect there to be a big shift in the supply chain, and I think pulses will be the likely choice to fill the gap. They’re environmentally fantastic, so that’s a big tick in the climate box, but they’re also very healthy as a protein. The switch to meat-free products is already underway, and formulations are changing all the time. Going to the supermarket each week, you see more and more on offer on the alternative protein aisle. So, going forward, I think we’ll see a significant uplift in pulses, especially in the yellow pea area.

Elsewhere in France and Germany, I think it’s likely we’ll see increases there, too; right now, there are big changes in the supply chain, with more protein extrusion factories.

Overall, I think the supply chain will change quite a lot. Certain crops will be under pressure globally including maize and corn, crops which are predominantly grown for cattle. In time, that will be slowly reduced, and pulses will pick up the slack, whether it’s peas and beans or lentils and lupins. Right now, the supermarkets want the products because consumer demand is there.

There’s also the National Food Strategy and pulses will have a big part to play there. Meanwhile, there's been the introduction of the new single farm payment scheme for farmers: the Environmental Land Management (ELM) scheme. Again, it’s all about making sure that pulses have a place in the rotation for farmers and making sure UK farmers are not overlooked.

With the government’s view to become carbon neutral by 2040, pulses will be a key tool, due to their big green footprint. We try to push that agenda as much as we can.

Pulses are at an incredibly exciting place at the moment, and the industry is adapting really quickly. In the UK, we’ve always had good growers and I would argue we've got the best quality in the world for beans and peas. The traceability is also second to none; from field to farm to fork, we deliver something no other nation does. The future is really bright. 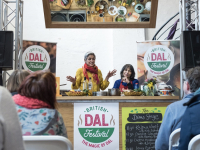