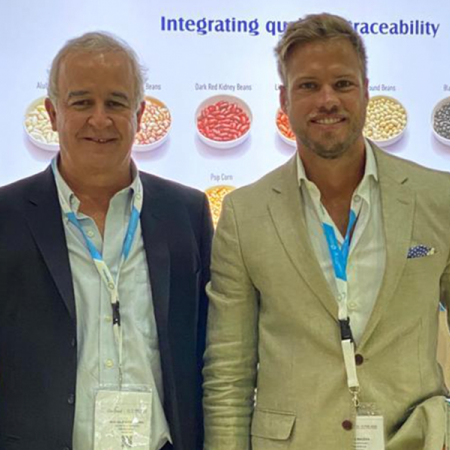 With the dry bean harvest now wrapped up in Argentina, fears about yields have been confirmed. Dario Bard caught up with Matias Macera & Marcelo Soto from Desdelsur to get the lowdown.

The GPC’s Argentina Roundtable will take place on Wednesday, August 31 at 11am AST in which Matias Macera will participate along with other experts. Speakers will cover the recent harvest and much more at this exciting online event.

GPC members are automatically registered and will receive their Zoom login details via email. This webinar is for GPC members only. Not a member yet? Register at https://globalpulses.com/member/register/

It seems that the dry spell, which set in at the end of Argentina’s 2022 white and colored bean planting, significantly curbed production and reduced caliber sizes across all classes. Alubia beans were especially hard hit. Production fell off by as much as a quarter on the year, not only because of reduced yields but also because of a 20-25% reduction in the seeded area. Alubias lost hectares to higher priced competing crops, including colored beans. In fact, increased planting of colored beans was ultimately enough to offset low yields and, consequently, the industry estimates 2022 colored bean production at levels similar to 2021.

For the full lowdown on Argentina’s 2022 white and colored bean crops, we reached out to GPC Gold Partner Desdelsur, a leading member of the country’s pulse industry and its top cranberry bean exporter. In this exclusive interview, Dario Bard spoke with Desdelsur’s trade manager Matias Macera and commercial manager Marcelo Soto.

GPC: Could you recap how the harvest went for Argentina’s white and colored beans?

Matias Macera: All bean classes across the entire bean growing area suffered from drought this year. In general, we are seeing lower yields and smaller caliber sizes. There were good rains at planting but then the moisture cut off, shortening the growing cycle and pushing up the harvest. The harvest began in mid-May, starting with cranberry bean crops along Route 5, the area hardest hit by the drought. The bulk of the harvest took place from mid-June to mid-July, earlier than usual, with the last of the beans coming off the fields in late July.

Marcelo Soto: In the case of alubia beans, most of the production is concentrated in the center of the dry bean growing region, along Route 5 in the area of Las Varas. That area traditionally sees very good production and yields. But this year, it was the area that suffered the most from the drought. Yields there ended up significantly below the historic average.

MM: In fact, it was the northern area, from Pichanal to Tartagal, that saw the best yields this year. That’s the opposite of what we saw in 2020, when the northern area was not as productive as the area around Route 5. But this time around, we got some rain in the north. It wasn’t much, just 30-50 mm, but it came at a key moment and that’s what made all the difference in the yields.

GPC: How do you see the supply-demand situation for Argentine beans in 2022-23?

MM: Let’s go product by product, starting with cranberry beans. We saw very active demand and good prices for cranberry beans this marketing year, ranging from $1,630 to $1,700 per MT depending on the destination. In fact, Argentina’s 2022 cranberry crop practically sold out already, thanks in part to limited supplies at competing origins.

MS: With respect to alubia beans, markets are quiet at the moment, and I believe it is because they are still working through their inventories of 2021 crop. European buyers purchased large amounts of alubia beans at the start of the calendar year, when prices were around $1,000. They built up their stocks at that time and those are the inventories they are working through right now.

MM: We spoke with some industry members in Europe that have told us they have stocks to last them through October-November.

MS: So, although we have a smaller crop this year, it is not being reflected in the pricing yet. Given the effect of global inflation on purchasing power, it seems that buyers are making spot purchases of small amounts for now. Consequently, sales are slow. I expect buyers will start replenishing inventories at the end of the European summer, and that’s when we expect to see prices reflect the reality of limited supplies from Argentina. Right now, prices stand at $1,300 to $1,350 for 210 caliber alubias and I see them easily increasing by $100 to $150 once demand is reactivated.

GPC: Do you think the price increase will be especially marked for the larger caliber sizes?

MS: Well, yes, but when the supply isn’t there, the markets will make do with what is available. That will generate demand and push prices up.

MM: I think that, because of monetary issues, markets have gotten used to not seeing large price differences across caliber sizes. The euro is not that competitive, and many markets are experiencing currency devaluations. Turkey, for instance, is a market that might value larger calibers, but it is quiet right now because the country is experiencing 80% inflation and its currency devaluation is at a historic low. That makes importing product difficult. Over in Europe, it is the packaging industry that prefers the larger caliber sizes. But that sector has been losing market share to the canning industry, which is fine with the smaller sizes.

MM: I don’t see us exporting much more than 100,000 MT of alubia beans this campaign.

MS: In terms of the colored beans, we already mentioned that cranberry beans are all but sold out. That’s notable because we are usually selling them up to October and even November. In the case of dark and light red kidney beans, I think export volumes will be similar to those we saw in recent campaigns. We will be selling them over a longer period of time, but I expect we will sell the entire crop at the prices Matias previously mentioned.

The one factor we will have to keep an eye on is the euro-dollar exchange rate. Our destination markets deal mainly in euros and many of these countries are not accustomed to the inflation they are experiencing right now. That has an impact on their purchasing power. On the other hand, we have to remember that pulses are affordably priced, and that it will likely be other, higher-priced products, such as meat, which will be most affected by this. At the same time, however, we can’t discard that the economic situation could affect consumption in other countries.

MM: It’s sort of a mixed bag. Because as Marcelo was saying, it is logical to think that in countries like Spain and Italy, the current economic climate might see a shift from a more premium product to pulses. But then in markets like India and Pakistan consumers might switch to lower-priced, domestically-grown pulses or to another product altogether, such as rice. Depending on the country and the economic situation it is going through, pulses may be a substitute or may be substituted for something else.

GPC: The trade environment has been difficult these past few years, first with the COVID pandemic, then high freight rates and now the war in Ukraine. What do you see as the biggest challenges for Argentine exports in 2022-23?

MS: For us, the biggest challenges are internal. Argentina is going through a difficult time right now and it is hitting us hard. Although we are used to the political and economic vicissitudes of the country, it has been rough. We always try to plan for the mid- and long-term and invest accordingly, but it is difficult to do that when your plans are constantly disrupted. We need someone to set clear, stable and lasting rules so that we can work and remain competitive.

GPC: I imagine this unpredictability is especially tough in a country that has had three economic ministers over the course of the past month.

MM: Right. Every month there is a new point of contact. There isn’t an economic plan. So as a private company, you don’t know which direction to go in. Because today a new economic minister is named and tomorrow you may have someone else with a different approach.

Another major challenge is the cost of freight, which remains very expensive. This has been worsened recently as reduced or restricted imports have limited the availability of containers. The import-export balance has to be in equilibrium for things to flow smoothly. This imbalance is a huge problem for a country like Argentina that depends a great deal on exports.

GPC: Lastly, as Desdelsur is Argentina’s leading chickpea exporter, I wonder if you could give us an update on how the chickpea crop is coming along?

MM: The crop is coming along nicely but it is small for the second year in a row. The seeded area is probably less than last year, mainly due to a lack of moisture. Either way, the crop looks good both in the irrigated and the dryland areas. We expect production and quality to be similar to last year.