The pea harvest is underway in Canada’s Western Prairies. August weather conditions have been generally wet and cool.

In its August 21 Outlook for Principal Field Crops, Agriculture and Agri-Food Canada estimates the area seeded to pulses and special crops in 2019/20 at 3.8 million hectares, up from 3.6 million hectares the previous cycle.

Canada’s pea area is estimated at 1.75 million hectares and production is forecast at 4.3 million MT, up 20% over the previous harvest. It is important to note, however, that at the Canada Pulse and Special Crops Convention held in Montreal last week, Left Field Commodity Research reported that Canada's 2018/19 dry pea production was underestimated by 250,000 MT. For the 2019/20 crop, half of the production is expected to come from Saskatchewan, 45% from Alberta, 3% from Manitoba and 2% from other parts of the country. In the U.S., production is projected at 800,000 MT.

Canada’s lentil area is estimated at 1.5 million hectares, about the same as last year, but with fewer green lentil hectares and more red lentil hectares. Production is forecast to increase 5% to 2.2 million MT, with Saskatchewan contributing 89% of that volume and Alberta the remainder. The overall supply is forecast at nearly 2.8 million, lower than last year’s nearly 3 million due to lower carry-in. Canadian pea exports are forecast at 1.8 million MT. At the Canada Pulses and Special Crops Convention, however, Mercantile Consulting projected slightly higher pea exports (1.9 million MT). In the U.S., production is projected to drop sharply to less than 300,000 MT.

The area seeded to dry beans in Canada is estimated at 142,000 hectares, about the same as last year. Because of a lower yield expectation, however, production is forecast at 327,000 MT, down from last year’s 341,000 MT. Ontario is expected to contribute 36% of production, Manitoba 43%, and Alberta 16%, with the balance coming from other parts of Canada. U.S. dry bean production is estimated at 1.1 million MT, about the same as last year.

Below we take a closer look at the major pulse-growing provinces of Alberta, Manitoba and Saskatchewan. The information that follows is drawn from provincial crop reports.

In the case of peas, the crop is currently being desiccated in the southern region. The region received cool weather in August, which delayed the harvesting of crops. Additionally, hailstorms in early August caused some damage. In the central region, the pea crop is facing heightened disease pressure due to excessive moisture. The same is true in the northwest region, where crops are experiencing root rot due to extremely wet conditions. Crops in the northwest region were also hit by hail in early August.

As of August 20, Manitoba pulse growers harvested 63% of their field peas, behind last year’s pace of 98%. In the southwest region of the province, rain and cool temperatures have slowed harvest. Half the pea crop has come off the fields and the harvest is expected to wrap up before the end of August. Yields have averaged 50 to 60 bushels/acre and the quality has been good. In the northwest region, moisture is lacking. Faba bean crop is maturing. Pea yields are expected to be below average to average. In the central region, the pea harvest is well underway. The quality is good and yields have varied from 40 to 65 bushels/acre. The dry bean crop in this region has set pods and is yellowing.

Growers in Saskatchewan are just starting to harvest their pulse crops. As of August 12, 3% of the peas and 1% of lentils have been combined. Harvest has been somewhat delayed by rains. Topsoil moisture is rated 81% adequate to surplus. In the southeast and southwest regions, pea harvest progress is at 8% and 5% respectively, and the lentil harvest is at 3% and 2%, respectively. In the east-central region of the province, pulse crops are being desiccated. This region has received some rain, which could affect the quality of the pulse crop. In the west-central region, the situation is similar, with pulse crops being desiccated and reports of rain. In the northeast region, peas are being desiccated. In the northwest region, pulse crops are starting to mature. 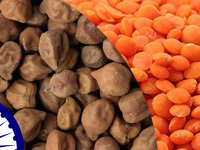