Food industry innovators, investors, researchers and policymakers gathered in San Francisco to share their visions for the future of food.

A lot has happened since the Good Food Institute (GFI) held its first Good Food Conference in 2018. As GFI co-founder and executive director Bruce Friedrich sees it, no less than three watershed developments followed in the wake of that first-of-its-kind conference.

First, plant-based meat options have exploded on the menu boards of fast food restaurants like Burger King, KFC, Tim Horton’s and Carl’s Jr., just to name a few of the big names on a constantly growing list. KFC is one of the newest additions. In late August, it made headlines with the launch of plant-based chicken menu items that sold out in five hours.

Second, the world’s leading conventional meat companies, namely JBS, Tysons, Smithfield and Cargill, have all thrown their hats in the alternative-meat ring, either launching their own plant-based product lines or investing in plant-based food companies.

And thirdly, more and more governments are dedicating public funding to spur research and development in these novel food products. Protein Industries Canada is but one example. Over the next four years, this public-private partnership will inject $153 million in plant protein R&D.

All of this bodes well, says Friedrich, as humanity wrestles with what to do about consumers’ undisputable appetite for meat. By 2050, the UN projects the world will need to produce 70% more meat to feed the world.

“We are not going to educate or shame our way out of the problem,” he states, accepting that convincing people to give up meat is unrealistic and offering another vision instead. “We can give consumers what they want – meat – but we can make it from plants and grow it directly from cells. Rather than trying to change human nature, we can change meat.”

With retail sales of plant-based meat products seeing double-digit growth and restaurant sales skyrocketing, the stage was set for the second edition of the Good Food Conference, held in San Francisco, California, from September 4 to 6.

The event attracted leading food sector innovators, investors, researchers and policymakers, and featured an array of panel discussions running the gamut from the latest in trends, marketing, investments, technology, research and policy.

For a taste of the second edition of the Good Food Conference, GPC offers a recap of the inaugural session, titled The Tipping Point: Why Plant-Based Meat is Going Mainstream.

The panel, led by FoodNavigator-USA editor Elaine Watson, examined the market shifts that are driving growth in the plant-based food segment. Watson opened the discussion by noting that U.S. plant-based retail sales are up 11% to $4.5 billion over a year ago. What is behind this growth, she asked Anubhav Goel, President of Client Growth Solutions at SPINS.

Goel sees conscientious consumption, a mega-trend that has been gaining momentum for several years, as the primary driver. This mega-trend, he explained, encompasses other, more specific trends, such as concerns over health, the environment, animal welfare and other people (ie. fair trade). Over the past three years, the demand generated by these trends has reached critical mass and led to the development of brand offerings of plant-based foods. At the same time, the vegetarian aspects of those products have enjoyed greater consumer acceptance through the emergence of new diets, such as flexitarianism. This in turn spurred retailers to develop more and more options to the point that today plant-based products are disrupting not just the meat category, but all food categories, including dairy, frozen foods, snacks and even non-food categories such as body care products.

Dan Altschuler of the global investment firm Unovis Partners agreed with Goel and described the plant-based burger craze that is presently grabbing headlines as a harbinger of what is to come in other food categories. For this reason, his firm believes in investing across all categories – chicken, seafood, dairy – in order to accelerate the process. Each category has its manufacturing challenges, he admits, but he also has faith that technology will resolve those issues and lead to a boom in plant-based products worldwide. In fact, Altschuler predicts that, given the strong interest among the younger generations of consumers, in 20 to 30 years, the majority of food products will be plant-based.

Burgers are at the vanguard of this protein revolution, explained Barb Stuckey, President and Chief Innovation Officer at Mattson, a food development company, because they are the poster child for unhealthy eating. Providing a healthier version, therefore, appeals to the conscientious consumer. With chicken and fish, on the other hand, consumers already feel those are healthier choices than beef, and therefore plant-based versions of these do not have the same level of appeal to the health-conscious consumer. But now that plant-based burgers have a foothold in supermarket aisles and grocery store shelves, plant-based chicken nuggets and fish sticks are sure to follow.

As to why the time for plant protein is now, Gil Phipps, Vice President of Our Brands at the Kroger Co., says it’s because we are at the intersection of curiosity and culinary.

“Customers are really open to plant-based alternatives exactly when the foods have become truly delicious, and that’s really exciting,” he said.

Phipps made big news on stage by announcing that Kroger is seizing the moment by launching its own line of plant-based meat and dairy products under its Simple Truth Brand.

The conversation then turned to the concept of blended products, an approach that reduces the amount of meat content in a product by substituting it with a plant ingredient. Sophie Egan, Director of Health and Sustainability Leadership and Editorial Director for the Strategic Initiatives Group at The Culinary Institute of America, a leading culinary school in the U.S., spoke about the success of the beef-mushroom burger. The idea, she explained, was to create a healthier burger by replacing some of the meat content with mushroom. The result was a burger with less saturated fat and sodium, fewer calories and a smaller carbon and water footprint. But more so than these health and sustainability benefits, the secret to the beef-mushroom burger’s success was its taste.

“Consumers preferred the taste of this blended burger to the 100% beef burger, and that’s why this concept has taken off like wildfire,” she elaborated.

The blended concept has especially caught on with chefs, who love that it lets them get creative and play with flavor and cuisine profiles by experimenting with different plant ingredients.

“It’s made the all-beef burger boring,” said Egan, describing the excitement this concept has generated among chefs and food service operators.

As to the mainstreaming of plant-based meat, the consensus of the panel was that the segment is bound to expand. Demand from younger generations of conscientious consumers looking for food options that are, first and foremost, healthy, but also sustainable and animal and environmentally friendly, is sure to push the food industry to improve on this first wave of successful plant-based food products, and thus win over greater and greater shelf space in the near future.

The Good Food Conference: Alternative proteins and the future of food 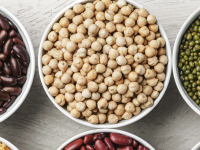