It’s going to be a very difficult year/ Hyperinflation, droughts and supply chain issues in Argentina

Ivan Martin is the commercial manager at Alimar, one of Argentina’s largest pulse producers and exporters. He spoke to Luke Wilkinson about its diverse international markets, the drive towards traceability, and how Argentina’s devastating droughts have affected the latest bean crop. 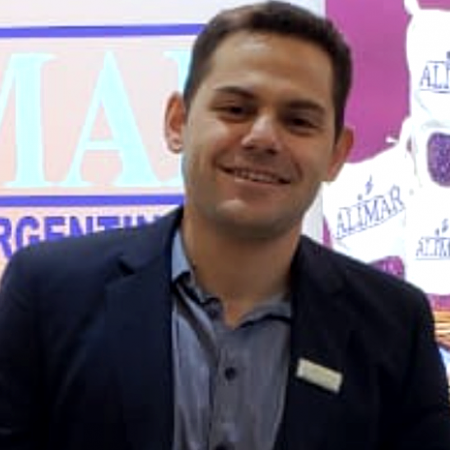 Firstly, could you tell us a little bit about yourself and Alimar?

Alimar is a company that has dedicated itself to the processing and export of pulses from the very start. Founded in 1988 with Spanish investment, its goal was to position itself at the origin of the best produce, then to process it and export the highest quality crops directly to Spain.
In 1996, the partners - one of whom is sadly no longer with us - decided to buy the company. Back then they were producers from here in the north-west of Argentina, bringing to the company a missing piece of the puzzle: the company’s own exclusive supply of product. The two current partners are Cesar Martinez and Eduardo Martin, whose own produce still makes up around 90 to 95% of the total product that we export.
I’ve worked as the commercial manager now for the best part of eight years. I’m an agronomist by trade, and I think being around the agricultural sector from a young age has led me to have a real passion for my work, and for marketing, which is so dynamic and enjoyable.

What kind of pulses do you work with at Alimar?

We’re mainly producers and exporters of beans grown in our region: Salta. Our most important product is the white alubia bean, which makes up around 75%, 80% of the total product depending on the year, but we are also notable producers of red kidney, light red kidney, dark red kidney and cranberry beans - all of these together tend to make up around 15 to 20%. Then we have a few things that are more niche: cinnamon beans and round imperial beans, all of which go to particular, specialized markets . We also do some chickpeas, and then other specialties outside of pulses like chia and sesame seeds.
In the end, the thing we’re known for best is the white alubia. Every year we are in the top five exporters in Argentina, and everything comes directly from Salta.

Where do you tend to export the most?

We have our traditional markets in Europe: Spain, Italy, Portugal, France, Belgium, Bulgaria and Greece, to give you a quick list. These countries are where most of our clients are but obviously there are other important markets such as Algeria, Turkey, and Israel - a real growth market for the white alubia bean.
With the coloured beans, we have a strong presence in South America: our main black bean buyer is Brazil, but black beans also go to Cuba and Venezuela. Colombia is very important for us when it comes to light and dark kidney beans.
Light kidney beans also go to Portugal, Costa Rica, Pakistan and the UAE, and we also export dark red kidneys to Spain, Italy, France, Belgium and Brazil.

One of the trends we've seen recently in the Argentinian pulse industry is a movement towards traceability in processes of production. What are your thoughts on this growing trend, and do you think more traceability will be necessary to meet EU pesticide regulations?

I think the changes have to be made and actually they are being made - that’s what I'm seeing here at Alimar and along the production chain that we work with. It's important to take note of what the global market demands, not only regarding the product but also how the product is brought to the consumer. In the end we are talking about food, and whatever the consumers who eat it are concerned with, whether that's pesticides or anything else, then of course we need to do the work necessary to make changes to the production chain.
From an infrastructure perspective, things are going really well; we have lots of laboratories working efficiently towards better control and analysis of residues. I'm also seeing changes from producers, where there’s a drive to track down alternatives to pesticides and reduce their use overall. It's a complicated transition and not one that will happen overnight, but the changes are definitely coming.

What can you tell us about the most recent harvest? Has the yield been affected by the difficult weather conditions?

The bean harvest in the main production zones still hasn’t progressed very far - we are around 15 to 20 days away* from beginning the main harvest.The initial results we have aren’t very encouraging; the yields are quite low in the majority of cases and there’s a lot of irregularity due to the drastic weather conditions that we’ve been experiencing (mainly the very severe drought that we had before and after the seeding).
Another important point is that the sizes of grain that we are seeing are very small. This is tricky from a commercial standpoint as Argentina usually offers much larger sizes but there’s still time to go before the end of the harvest and we’re hoping that the later areas to be harvested might have better yields that can counterbalance the poor results we’re seeing in the early stages.
*(As of June 1, 2022)

Of course, the rise in corn and wheat prices has a great deal to do with the ongoing war in Ukraine. If this tragic situation continues and commodity prices stay high, what effect do you expect to see in the next pulse seedings?

It is hard to see how long this situation will last but of course I hope it will be short. If it were to continue long-term, maintaining the high commodity prices we’ve spoken about, next year there could be a significant change in producers' decisions. For example, here, both corn and soybeans are summer crops, which would coincide with the summer pulses, such as all the different varieties of beans but wheat, which is obviously a winter crop here, would also coincide with some pulses like chickpeas. The overlap of crops has real potential to shrink the acreage of pulses overall.

Furthermore there is the issue of fertilizers, which in large part are exported by Russia. With some doubt now surrounding this supply chain, what effect could less access to their fertilizers have on pulse crops in Argentina?

I think a question like that requires us to take a wider view of the global context of imports that we use in production, processing and the whole distribution chain. We shouldn't just look at fertilizers, but also everything that is required for us to keep working under conditions of scarcity. Clearly we're going to see a direct impact in costs, production and exports. This would inevitably lead to producers needing to make an analysis to decide the division of their acreage.

Perhaps producers might opt to avoid crops like wheat and corn because they require higher quantities of fertilizer?

Perhaps, yes. It's difficult to say exactly what the producers will decide in the moment, but the analysis would be made based on the market, the stability of each crop’s price, and yes, the cost of fertilizers, but also agrochemicals and other inputs.

I want to touch briefly on another complicated issue: Argentina's hyperinflation, which this year is predicted to reach 55%. Right now we’re also seeing a gap of 82% difference between the Argentinian peso and the blue dollar. What effect does this have in the production and distribution of pulses in Argentina?

It has an extremely negative effect. The numbers that you've mentioned are absolutely correct; Argentina has been dealing with an economic situation that is really quite unstable, and the effect is the distortion of all kinds of costs, from production and processing, up to distribution. It creates uncertainty and makes it difficult for us to work, and the scarcity of US dollars and problems with imports that we are having produce a rising cost for all of the raw materials that have to be imported and used in all our different processes.
If we analyze the services and products that are paid for locally in pesos, the prices follow the rhythms of inflation and the devaluation that accompanies it. There are rising costs paid in dollars as well, of course. In an inflationary context like this, the dollar that the producer and exporter work with doesn’t line up with the reality of the market.

Do you see the situation improving over the next year?

This is just my opinion, but I think it's going to be a difficult year - we're seeing some very, very incendiary numbers. It's a critical situation we’re in and it's going to be hard to come out of it within just a year, especially if political policies don't change.

In terms of pulse consumption in Argentina, the average person only eats around 800g a year. Do you think there's anything that could be done at a governmental level to increase this low consumption rate?

This is a question we’re all constantly asking ourselves in this business, and I think we all feel a certain responsibility to try to do something about it. With respect to the government, I think it’s going to be fundamental that the government interacts with the private sector to try to incentivise the consumption of pulses. For me, children will be key, alongside the parents who are hopefully teaching their children the benefits of pulses.
I think the main problem Argentina has with pulses is that we have a culture that’s separated from its roots. If we go to our closest neighbors, Brazil eats around 15 kg per person every year. Once you've got into an eating habit, it's tricky to get out of it. That's going to be the biggest challenge for us and we're going to need a combination of private companies and government to go into schools, at all different levels of education to try to encourage consumption through entities like the UN FAO (Food and Agriculture Organization), for whom pulses are considered essential as a source of nutrition and for securing food security worldwide.
Right now demand for pulses within Argentina isn't high, but when you go to the supermarket you find dried pulses in packets. I think we need to put to work all of the tools we have in the food industry to create new, more complicated products using pulses that we see in other countries. Products like that could have a really positive impact.

The last question is about the future of Alimar. How do you envisage it changing over the coming years?

With so many years in the industry, we have many valued long-term clients. Together we find ourselves in a situation where pulses have huge potential for growth, not just beans, but all pulses. We're going to keep developing products, finding new markets and making sure we satisfy our customers’ needs, putting real quality on consumers' tables. For us, that’s the most important goal of all.