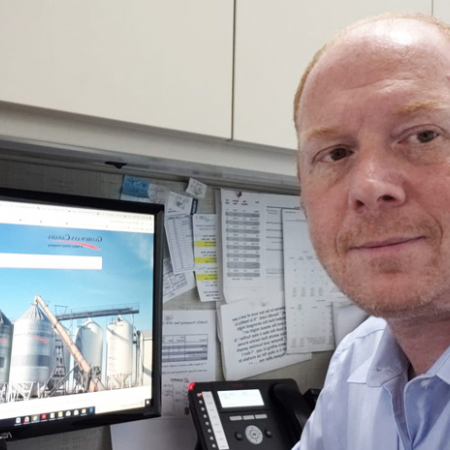 As Canada’s New Crop Comes In, Quality is a Concern: An Interview with Marcos Mosnaim of Globeways Canada Inc.

The early scoop on this year’s pulse crops from one of Canada’s leading pulse processors and exporters.

The Canadian pulse growing season started and is ending under dramatically opposite climate conditions. At planting and into the early stages of crop development, dry conditions prevailed across the western prairies, stunting plant growth. Conversely, at harvest, wet conditions have slowed the combines and raised quality concerns.

“Because of all the rain, harvest is late and depending on the product, there are some quality concerns, and due to the dry conditions early on, there are some yield issues as well,” says Marcos Mosnaim from his office in Mississauga, Ontario.

Marcos has been involved with the Canadian pulse industry for more than 15 years. Presently, he is the senior trade manager at Globeways, a Hakan Group company and one of the leading pulse exporters in Canada. Although Marcos cautions that, until the harvest is over, it is difficult to assess crop quality and estimate average yields, he does offer his impressions of the early samples he has received.

“On peas, I haven’t seen any quality issues so far. Most of the peas look good and the yields are okay. They aren’t great, but they aren’t awful, either,” he says. “On lentils, the quality depends on the type. Green lentils, for instance, are not as dark green as we would like because of the dry summer. Also on large green lentils, because of the rains at harvest, we will have lower grades this year. We’ll have 1, 2, extra 3 ,3 and sample grade lentils. The yields look a little bit lower than average because of the lack of moisture at the beginning.”

Marcos expects the pea and lentil harvest to wrap up soon, weather permitting. The dry bean harvest is also late due to weather issues, but with some dry weather, it should be done before the end of October.

“We have received less than 10% of the bean crop we contracted,” says Marcos. “It is too early to talk about the quality of this year’s harvest, but from what I have seen up to now, the caliber is a little smaller than usual. The color, though, is not bad. Here again, it depends on the product. The black bean crop should be okay. The pinto bean crop will probably be a little darker than last year. The caliber of the kidney beans will be a little smaller. I only saw one sample of cranberry beans. The color and caliber sizes were okay.”

Marcos believes that because of the lack of moisture early on, dry bean yields will end up 10 to 20% below last year’s levels.

In this extended interview, Marcos also shares his insights on the market outlook for Canada’s pea, lentil and dry bean exports, informed by his many years of experience in the global pulse trade.

GPC: Could you tell us a little bit about yourself and how you got your start in the pulse industry?

Marcos: I’m originally from Chile, but grew up in Brazil when my father’s construction business took us there. I attended university in Chile and after graduation I decided I needed to improve my English, so I went to Canada. I liked it there, so when I returned to Chile, I did the paperwork and moved here permanently. I first lived in Winnipeg. I stayed there for more than three years and that’s where I got my start in the pulses industry, working for Legumex. Then I moved to Toronto, where I earned my MBA. And later got hired by Globeways to help develop their business.

GPC: Could you tell us about Globeways history and its pulse business?

Marcos: Globeways was established in 2003. It started as a small trading company focused on North American origination. Later, as the company grew, it added Hakan Agro DMCC as a major shareholder, allowing Globeways to grow stronger and faster. I joined Globeways in 2009. Back then the company was exporting 20,000 to 25,000 MT of product. Today, it sells close to 200,000 MT, supplying local and foreign customers. In ten years, the company drastically increased not only its sales, but also its assets in the country. When I started, Globeways had shares in one processing facility. Today the company owns six facilities distributed across the prairies and is always looking to expand.

GPC: Based on your experience as a global pulse trader, how do you see the markets for Canadian pulses this year, starting with peas?

Marcos: The market outlook for peas isn’t great. In the case of yellow peas, prices are depressed, and farmers are reluctant to sell at current levels. They feel the market cannot go any lower. Right now, the main support for pea prices is the feed market. If the feed market goes lower, prices may drop, and if it goes up, it will push yellow pea prices up with it.

In that sense, the industry is back where it was 15 years ago, when I started in this business. Back then, the price on yellow peas for human consumption was slightly above the feed price. That’s where we are today. Feed is ruling the pea market.

On green peas, its is a little bit of a different story. I don’t see the green pea price dropping much further. The crop this year is smaller than last year, and our old crop inventories are pretty much cleared out. This harvest, with the weather issues we are having, we may end up with a lot of bleached green peas. I haven’t seen enough of the crop to have a strong opinion on the quality, but if we end up with a lot of bleaching, green pea prices will stay firm if not increase over the course of the campaign.

GPC: How about lentils?

Marcos: There are way too many red lentils in the world right now. The big market is India and it’s not jumping up and down to buy lentils, so the market should remain depressed. I don’t see farmers willing to sell product for much less than today’s levels. Their feeling is that prices won’t drop further, and they have the money and storage to hold onto inventory for another year. So we’ll have to wait and see what happens there.

On green lentils, we’ll have a regular crop this year. If demand stays soft, prices may drop a little, but not much. It depends what happens with pigeon pea crops in Asia and Africa and farmer’s sentiment. If there are issues with pigeon pea production at those origins, India will turn to green lentils as a substitute and we may see prices move up as a result. That’s possible because India has not been buying pigeon peas from other countries and consequently a lot of those origins are cutting production. I don’t see farmers in Africa and Myanmar, for instance, growing a lot of pigeon peas. If they cannot get good prices for them, they’ll switch to something else.

GPC: What about beans?

Marcos: Globally speaking, beans is the largest of the pulse crops, much larger than lentils. There are many countries that produce beans at different times of the year, so if there are weather issues anywhere in the world, demand can spike. Just look at Mexico. The bean crop there was seeded under drought conditions, so there is an opportunity for Canadian beans to make their way to Mexico this campaign. Brazil grows three crops a year. If they have an issue with one of their crops, that creates an opportunity. And then you also have to consider Africa. Will they have good yields this year or not?

Besides all that, you have China, which used to be an important bean exporter. Now it is slowly becoming an importer. That’s a big opportunity to grow right there.

GPC: Returning to the subject of India, how is the ban on pea imports and the tariffs on lentil imports impacting Canada’s pulse trade?

Marcos: Basically, if you have tariffs what ends up happening is that prices tend to fall. The big issue is that the prices of other crops that farmers could seed were not great either. So growers didn’t have good options. That’s why they planted a lot of peas and lentils again. If the tariffs remain, or if there are even more tariffs imposed, then we may see a reduction in the lentil area next year. But that’s only speculation at this time.

GPC: India is moving towards pulse self-sufficiency. How do you see that evolving?

Marcos: At one of the trade shows, there was a presentation about this that pointed out that the biggest challenge India has in that regard is their low yields. Unless they improve their efficiencies, they just don’t have enough land to produce all this grain. Therefore, if they opt to produce more pulses, they are going to have to reduce the area of sugar or some other crop. In the short-term, I don’t see them sustaining pulse self-sufficiency, but over the long-term, if they can improve their technology and breed varieties with higher yields, they may even become a net exporter of pulses.

GPC: How might Canada’s pulse sector adapt to that eventuality?

Marcos: Basically, the world is an evolving place and you keep looking for alternatives. One thing is certain: there’s still not enough food in the world. If the demand for lentils isn’t there, we will produce something else that the world demands.

For instance, nowadays there is a boom in all these new plant-based protein foods, and that creates a whole new world of opportunities for peas and other pulses, as well. Markets keep evolving, and our job is to evolve with them.

GPC: How about other key markets for Canadian pulses? Turkey, for example.

Marcos: Yes, Turkey is an important destination for Canadian pulses. They have been buying, but not as much as in other years. They have their own problems this year with currency fluctuations. And they are closer to the Black Sea region, so they have been getting cheaper pulses from there.

GPC: The Black Sea region, and Kazakhstan particularly, have been called the Saskatchewan of Asia. What do you expect from that region this campaign?

Marcos: They are becoming an important part of the puzzle. They are big producers, but they still have issues in terms of producing consistent quality and establishing themselves as reliable providers. That’s why North American and Australian pulses still maintain a premium over their product. But they are closer to the destination markets, so they do have an advantage there.

GPC: As a pulse exporter, what are the major factors you are keeping an eye on this campaign?

Marcos: Clearly foreign exchange rates are an important factor. They have been very volatile all over the world. There may also be financial issues, so everyone has to consider how strong their counterparts are financially.

Outside of that, on the demand side, I see it remaining stable. There still isn’t enough food in the world, so the demand is there. It is just a matter of being at the right price. Opportunities always crop up. The weather is never perfect all over the world, so there will always be an opportunity to move product somewhere at some point.

GPC members remember Paul Lambert: “A legend and a pioneer in the world of agriculture trading.”