The Grain Exchange of Cordoba published a new report on crops that confirmed the estimate - a sharp drop in the crop of chickpea, but less than what was presaged.

The fundamental data in this respect is that, finally, the surface lost by the strong frosts of June was lower than the originally calculated, product of lots that could reach harvest, although logically with very low yields.

Specifically, the Department of Agroeconomic Information (DIA) of the market entity estimates a production of 74,700 tons of this legume, 47 percent below the record of 140,800 of the 2016/17 campaign, but better than the 66 percent reduction year-on-year that was presumed until last month.

"With more advanced harvest, yield estimates are adjusted, raising values with respect to those of a pre-harvest that was visibly affected by unfavorable environmental conditions," the report indicates.

One key is that the lost surface is projected at 21,300 hectares; that is, a third of what was planted, when initially it had been located around 30 thousand hectares (half).

According to the Bolsa, the improvement in estimates is due to "the decision that many lots continue their cycle to the end, harvesting when yields exceed eight quintals per hectare, a situation that occurred especially in the northern departments (Totoral and Dry river)".

Anibal Eduardo Sequeira, Gobal Ideas, has this to say: Chickpeas: Argentina had a not so good crop. We are still on the final stage in Cordoba province due rain delay and also because of winter deep frost we had in the middle of the season. Those frost delayed and restarted plantations mainly in Cordoba area. Due that situation, the Argentine main chickpeas area (Cordoba) was deeply affected and reduced the production yield, sizes and final quality.

Harvest situation in Tucuman and the North (Salta, Jujuy and other Provinces) started by beginning of October and everything was OK. Harvesting season ended around end November -beginning December. Production was good in volume and color, but not so good in sizes….main quantity was 8mm (about 60%) and the rest 7mm and just a few batches with 9mm.

At the beginning of the season we had a projection of around 160/180 thousand or perhaps 200 thousand metric tons; but finally production will be much less than that. We need to see final figures of Cordoba still.

In terms of business, due to continuous price decrease since harvest started (October 2017) shipments were delayed and many contracts and forward contracts were defaulted from some regions, especially Middle East. Also business was delayed because farmers required firm prices and international markets were paying less price every week.

We do not have an exact figure of actual stock, but for sure production from Cordoba will be 30/40% less than projections and final export figures will also be affected.

Anyway, Argentina still has stock to continue selling good quality chickpeas, mainly 8mm and some 7mm. We will also have second quality batches for sure.

According to Trade Food Group, the result of chickpea harvest was around 150,000 tons - 50% 8mm; 25% 9mm; 25% 7mm. At this time Argentina exported around 50,000 tons and there is no demand. Argentina is just exporting to honour contracts signed before the harvest. Some importers are awaiting the results of harvest in India.

Dario Bard, International Food Trader magazine has shared the following: The crop was devastated by frost. Most of Argentina’s chickpea production comes from the Province of Córdoba. This year, nearly half of the chickpeas planted there were lost due to frost. Recently, the Bolsa de Cereales de Córdoba (Córdoba’s Grain Exchange) conducted a field survey. Below is a summary of what they found with respect to the chickpea crop. 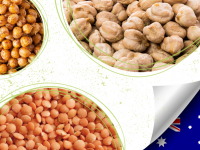 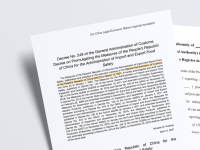